Usually at this point in the proceedings I'd write about how my children have driven me insane/eaten everything in the house/won't stop fighting.  Well yes, they have done all of those things, but actually? This hasn't really bothered me.  I think that after 10+ years I am finally used to all of that.  I am even a little bit sad that there are only a couple more weeks left before they go back to school.

Either that, or they've ground me down so much that I've developed some kind of parenting Stockholm Syndrome, where I feel compelled to hang out with my small captors, watching Netflix and eating sweets for six weeks. (That actually does sound quite good, doesn't it? Hmm?)

Anyway, the holidays haven't been that bad this year.

Apart from one thing.  There is one thing that has been different this year.

The teen boy has taken his GCSEs.

This has resulted in two things so far.  One, he has been at home for nearly twice as long as a normal school holiday, and constantly eaten the contents of my fridge (sorry, I wasn't going to mention that, was I?).  And, two?  The long and tedious wait for his results.

And here we are, finally.  T-1.  The day before results day. 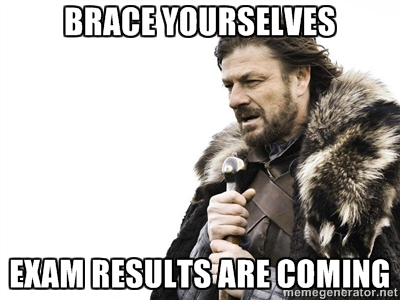 And, I'll admit, I feel a bit nervous for him.  At the same time, I don't know whether I should be.  They are his results after all, and what will be, will be.

It's all new to me, this part of being a parent.  It's a bit that nobody tells you about.  There are no rules as far as I can see.  Just get them through the exams.  Hope for the best.

For me, this has been a learning curve.

I've watched as my very capable teen has just simply become so overwhelmed with everything that he doesn't seem to care anymore.

We've sat through parents evenings where his teachers have said just that.

We've encouraged, reassured and, as parents are prone to do, nagged him to get his revision done. We've also bribed him with the promise of a new games console (another parental tool).  I'm not sure any of it has had much effect on our laid back teen.

When the exams were finally finished, we tried to think about something else for a bit.  He went away on an NCS course which prevented him from lying in bed all day for four weeks brought him out of his shell for a bit.

Then, something happened that wasn't part of the typical post exam wait.

The school called.  Several students, including my boy, had been accused of plagiarising their coursework.  The examination board were asking questions about the invigilation process and could the teen boy go in and write a statement to support his/the school's case.

So he did.  More agonising waiting while the exam board decided whether to take things further. Would the teen ever even get any results or would he be disqualified completely?  Would he end up with a criminal record?  It probably couldn't get any worse than this!

They dropped their case against the school/students just a week ago.  No further action.  Results as normal.

Except it has left us with a few questions going forward into A-Levels (same school/same teacher). What if this happens again? Should he even be looking at other colleges and courses? Nothing is ever straightforward is it?

Would I do anything different as a parent?  After all, I've got to go through this again next year with the teen girl.

Well, no, I don't think that I would.  Apart from the fact that all kids approach their exams differently and I don't think there is any way you can predict how they'll handle the pressure until it happens.  You've just got to support them and deal with each situation as you see fit.

My take away point from this is that things can and do go wrong, whether that's before, during, or after. And I do know that whatever happens tomorrow on results day it'll all come good in the end.

I look back at my own exam results 27 several years ago, and I think they were OK, a means to an end. While they seemed important at the time, they don't define me today, just as the teen boy's results won't define him forever.

Perspective.  That's what I need.  Just like learning to walk, speak, eat, read or any of the myriad of other childhood milestones we have a hand in, exams are just another small part of it all really, aren't they?
Posted by Sounding Like My Mother at 09:53 2 comments: 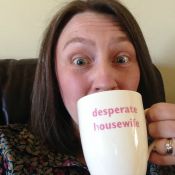